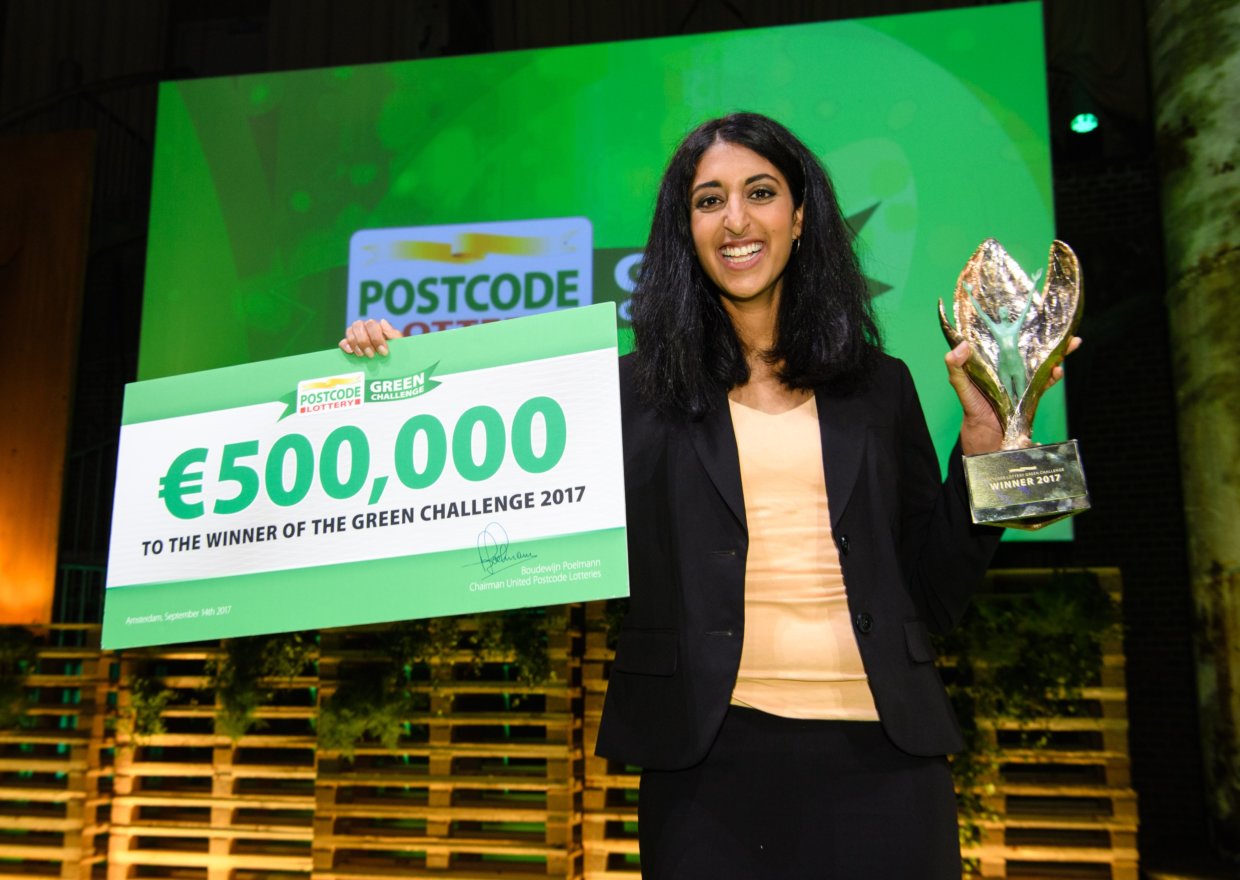 In Rwanda, where the vast majority of the population live in houses with dirt floors, diarrhea is one of the leading causes of childhood death. Healthy floors decrease the likelihood of childhood diarrhea by 49% and parasitic infections by 78%, but they’re often too expensive for the Rwandan poor. The Rwandan/American social enterprise EarthEnable is tackling this issue. With a novel solution, EarthEnable has won the Postcode Lottery Green Challenge 2017, one of the world’s largest sustainable competitions. Now, six months later, CEO and co-founder Gayatri Datar is back in the Netherlands.

“It is basically a simple version of a linoleum floor that we do,” Datar explains. Made from compressed local earth sealed by a layer of oil, their floors are 75% cheaper than concrete floors. Datar: “The thing is, it’s not the product. In fact, it has been available for quite a long time. The difficult part is getting it to people, doing the customer service, having quality control, figuring out how to build the system around distributing these materials. We had to find out all of it, since we started our enterprise 3,5 years ago out of a business challenge at Stanford University.”

EarthEnable started with a dream to improve health outcomes through simple and affordable solutions. Traveling to Rwanda with the Stanford class “Entrepreneurial Design for Extreme Affordability”, in 2013, four Stanford students were tasked with their partner organization – The Mass Design Group – to design a product or a service that would make homes or communities healthier. They first sought to understand how sub-optimal homes affected physical and emotional health outcomes and were shocked to discover the significant health problems that dirt floors cause. Eliminating a dirt floor from the home results in dramatic reductions in childhood asthma, diarrhea, malnutrition, and parasitic infestations. They realized that they could change lives if they found a way to floor Rwanda.

“Haha, how have we used it you mean? Largely it enabled us to make some of the bigger strategic investments to further build the system. It means that we invested in our IT system, and we have invested in bringing in a couple of senior level hires. We’ve also scaled to double the area that we’re in, so we massively increased what we were doing. Finally, we’re also looking much more into monitoring and evaluation, to evaluate what our impact is.”

What are you aiming for, in terms of impact?

“Our mission is make the living conditions healthier for the world’s poor. We want to start that by eliminating dirt floors, by having no more people living and sleeping on it. It would take a lot of time to do that all by ourselves. In fact, we see ourselves as a company that builds an industry: currently we have zero competitors, but we want to show the market that it’s an industry that is worth competing in and this is a customer base that is worth investing in. We’ll give other companies all the knowhow on how to do it. We are a for-profit company but we are owned by an NGO, so I own zero shares in the company. For me it’s not about EarthEnable only, but about creating a system to eliminate this problem. That is much more compelling to me.”

Your customer base often consists of very poor people. Does that change the way you operate?

“Well, people in general are not that different. Most people want to live in a beautiful place, where their house is clean. So it’s not really a hard sale as 99,6% of the people we asked wanted a floor. But it’s just a matter of affordability, of whether they should prioritize this. ‘Is now the right time to buy the floor or can I do this later?’ People often don’t have sixty dollars to pay for the floor. To overcome this problem we have a whole savings infrastructure, with cooperatives, banks, and savings groups, to make sure people have the ability to finance the floor over time.” 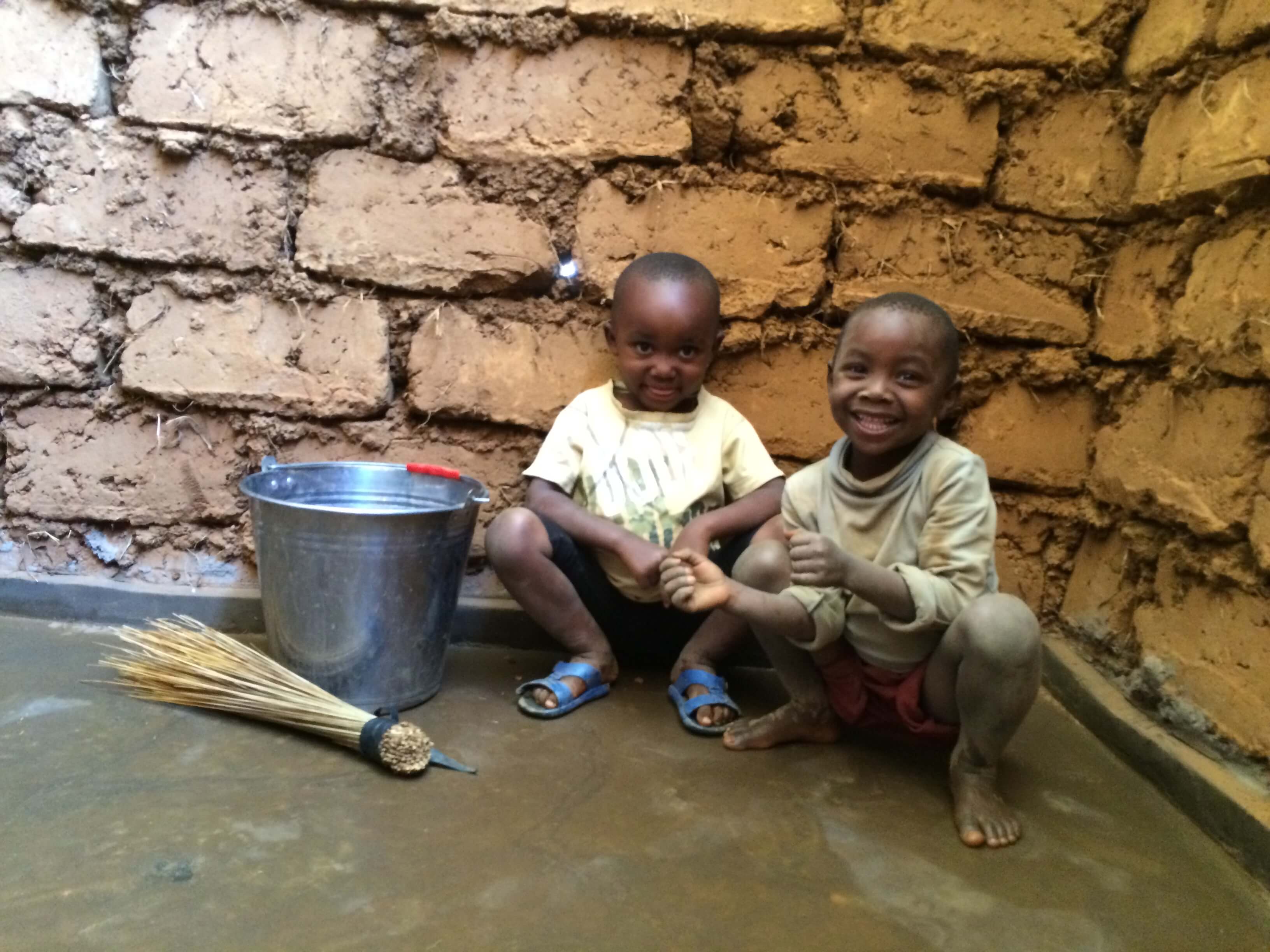 Who is actually selling the floors?

“We hire sales representatives from villages, which is really important because they know the communities around. They are more often than not female and almost all of them are youth. They really understand the problem themselves because they most likely used to live on an earthen floor too. So they go door-to-door and explain what the product is, and that people can save money on health expenses by having this floor. But having sales representatives from the villages can also pose problems. It would have been much easier when these people came from the capital Kigali and had been trained in an office. Our sales representatives from the villages are trusted, but not as educated. They usually have received some secondary education, so they can read and write. But many of them have difficulties with measuring a house to give somebody a quote. Often we have to go through basic math of how to do the measurement. All of them receive a long training.”

Do the floors require a lot of maintenance?

“Not necessarily, but we do invest a lot in quality control. In Rwanda people may have a goat on the floor, or they may have a very heavy water tank that constantly spills water on the floor. No linoleum floor, no concrete floor can withstand that kind of damage. We have good repairers, but it is also a part of what we do to teach people what it means to have a floor. It’s similar to when you have never owned a car: you may not know that you have to change the oil every once in a while. The real important part about any international development intervention is having the systems changed. There are endless toilets that don’t function, tomatoes rotting in defect storages, or water treatment facilities that are broken because they are built and then people walk off.”

What is EarthEnable’s biggest challenge?

“The tension between quality control and scale. We want to scale massively and rapidly. So we are figuring out the pace by which we can go fast enough to meet our ambitions but slow enough that we are ensuring quality throughout the way. Now we have some very big players interested in giving us very big contracts to really scale much faster, and that is incredibly exciting. But the challenge will be to ensure quality in that process.”

Previously you worked as a consultant at Worldbank and Dalberg. Did you always envision becoming an entrepreneur?

“No! I am a very risk averse person. But this happened really gradually. We came up with the idea and wanted it to happen, so I thought let me work on this for three months and then go back to my consulting firm. But three months became six months and now it has been 3,5 years with no end in sight. So it was basically a snowball and I fell in love!”

I reckon the skills that are required as the CEO of a startup are very different from the ones as a consultant?

“Certainly, although there are some interesting overlaps. Definitely having a more strategic perspective has helped. I had to break my brain a little to think more rapidly and be comfortable with failure. It helped change the way I think about problems. And it has been so rewarding to, on a day-to-day basis, see your impact. It is a magical experience. It is not what I envisioned myself in, but now I am in it I don’t know if I’ll ever go back.” 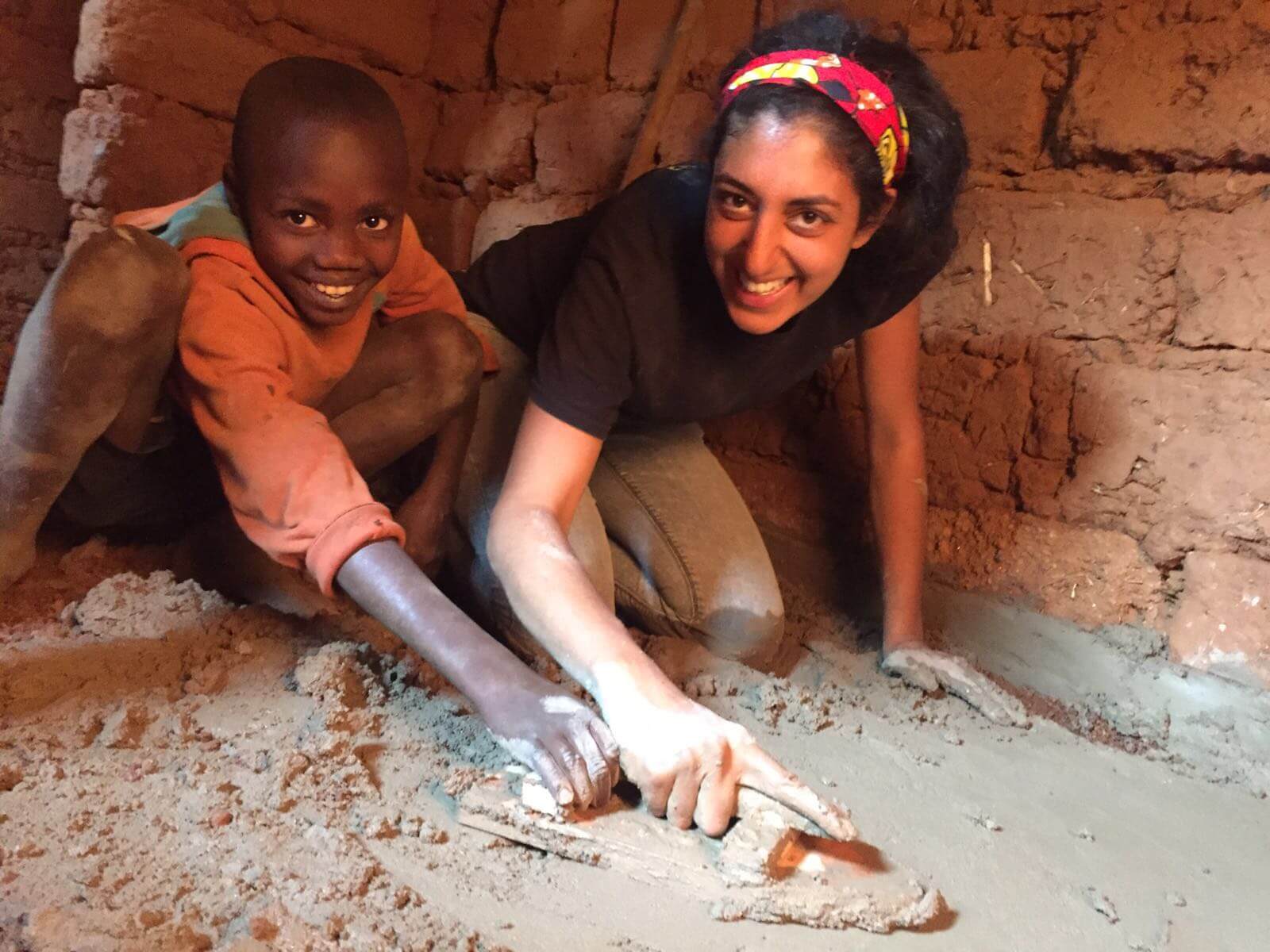 “I love my job! We are located in Nyamata, south of Kigali, so we don’t sit in a big office building but we are out there interacting with the villagers. Each day we interact with the masons who make the floors and with the customers who buy the floors. It is really rewarding because I have a very passionate team and the ability to constantly improve whenever we want, wherever we want is incredibly exciting.”

You have roots in India. Do you have plans of entering the Indian market?

“My parents are Indian indeed and there is a huge amount of dirt floors in India! Our international ambitions are huge. We’re already in Uganda and aim to eliminate dirt floors everywhere – but it all starts from the ground up!”