When you move out of your home country, what can you still do to support your homeland? A lot, as the story of Hella Sketch shows. With her creative sketches, Halah Ziad helps to create openness for different ideas under young Iraqis. Furthermore, Zaid plays her part by raising awareness on COVID-19 and breaking the stigma of having this disease in Iraq.

Talent from her mother

Halah Ziad was born in Baghdad, Iraq, but currently, resides in the United States. She graduated with a degree in economics and business and found out that she had inherited her mother’s talent for drawing. Her sketches were received with enthusiasm as people encouraged her to do more with this talent. This enthusiasm motivated her to start Hella Sketch, a page with her sketches through which she can give social commentary. While in the United States, she spent plenty of time on social media which helped her to understand more of the Iraqi mindset and provided inspiration for her sketches.

With her sketches, Ziad wants to educate people, especially the younger generations. She mentions how young Iraqis sometimes encounter difficulties with accepting other ideas. As such, Ziad stimulates young people to be open and respect differing opinions. “At least, accept me for who I am. Regardless of my background, religion or colour.” In this way, she also addresses the problem of hate speech in Iraq which has been the cause of many deaths in recent decades. In a country like Iraq, with many armed groups next to the official army and a corrupt judiciary, hate speech can culminate in violence very easily. “Hate speech needs to go away until it has all faded away.

Expressing yourself in Iraq

By drawing sketches Ziad addresses social issues – such as woman empowerment and sexual harassment – that usually spark reactions from both supporters and opponents of her work. Although in Iraq it is not always easy for people to express their opinions, Ziad tells that it is easier for Iraqi to do this in an online environment than in real life. Sharing opinions on social media might help young Iraqi to give their opinions in real life as well. However, social media does not only make it easier for people with good intentions to give their opinion, but it also allows for hate speech. Ziad tells how people who use online platforms to share hateful messages mostly use fake profiles.

For Ziad herself, it was not always self-evident to express her opinion either. When she was still living in Baghdad, she did not express her opinions as people around her did not accept this. Living abroad gave her the confidence to speak out. “Now I see people are accepting what I am saying so it gives me more power.” Not everyone accepts it though. Some people believe that Ziad is not allowed to give her opinion anymore because she has left the country. “I tell them: inside Iraq, people can’t talk because they might get arrested or killed and outside you don’t allow us to speak. So who is going to speak then?” 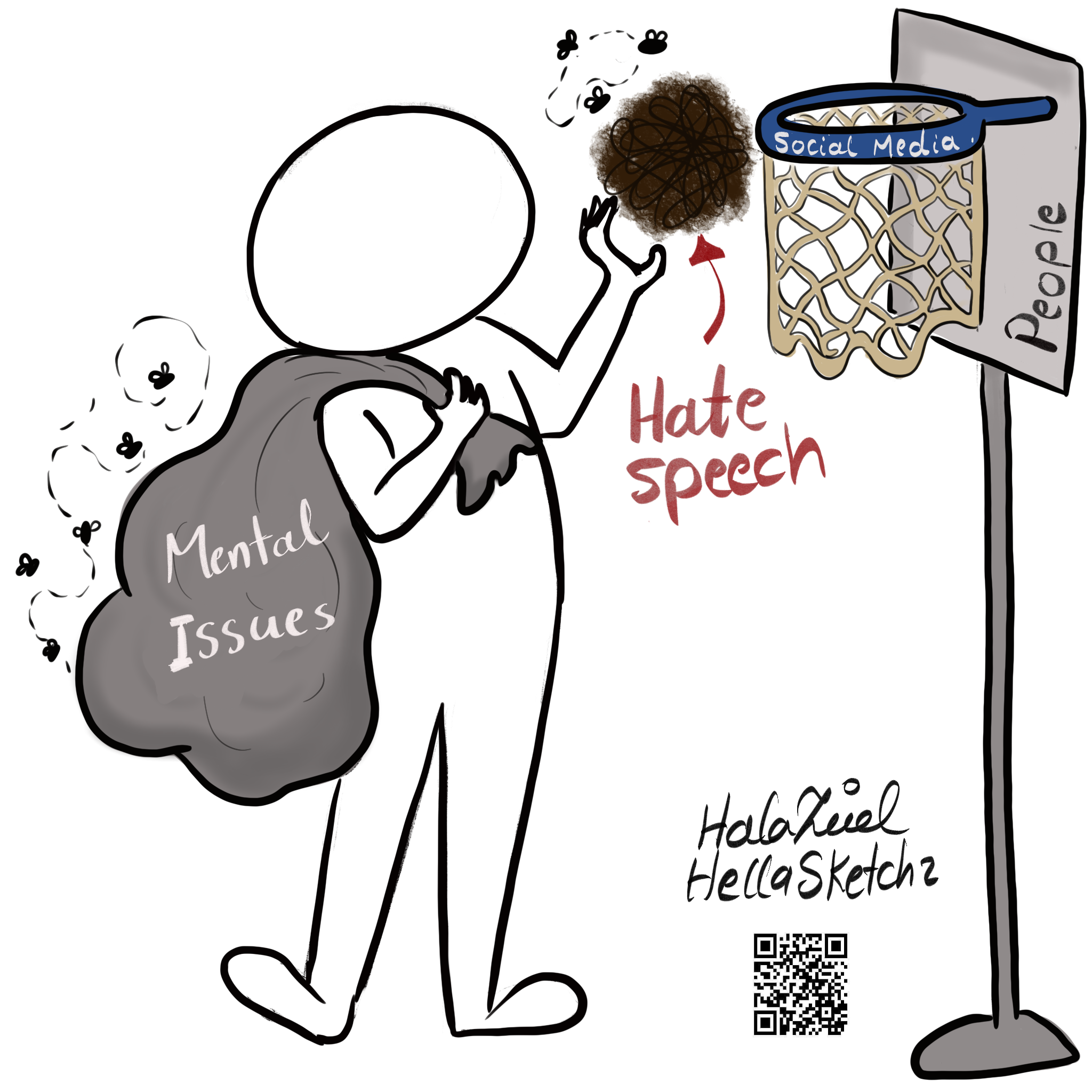 Using the unexpected against negative reactions

Ziad considers the reactions she gets on her sketches as something positive, also if the public disagrees with her. This fits perfectly in her mission that revolves around making people more open to different opinions. By her posts, she shows you can give your opinion and disagree with other people without making hate speech out of it. “They are accepting my posts because I am representing this idea without hurting anyone.’’

When Ziad received reactions on the way she was drawing female figures, she decided to come up with something unexpected instead of choosing sides between different interpretations of religion: she drew a woman like a flower. “They will twist their ideas against me, so I will try to find something more peaceful.”

“They will twist their ideas against me, so I will try to find something more peaceful.”

Breaking the stigma of having COVID-19

Recently, a media company working for the Iraqi ministry of health and The United Nations Assistance Mission for Iraq (UNAMI) have asked Ziad to draw sketches about the Coronavirus. Raising awareness about COVID-19 is important in Iraq, as she explains that the virus is perceived as something to be ashamed of. For this reason, especially girls often do not go to hospitals when they are infected with COVID-19  She wants to break the stigma of having the Coronavirus. ‘’You don’t need to lie about it. When you are honest you will save lives.” Ziad gets a lot of positive reactions on her sketches addressing COVID-19. “People love it. They love to see things in a different way. It is specially made for the Iraqi. Their language and their mindset.”

Although Hella Sketchz already has 29.000 followers on Facebook, for its founder it is not about quantity, but about quality. Ziad is happy when she can bring about change in the life of even a single person. She tells about a boy who started bullying a girl on social media in the comments under one of her sketches. She responded by commenting that he could give his opinion without hurting anyone. Subsequently, the boy apologized to the girl, to Ziad and even sent her a personal apology. “It really makes me happy.”

Although Ziad wants to make an impact with her work, she does not consider herself as a social entrepreneur. In her view, a social entrepreneur is someone who already had an impact on a huge amount of people instead of only having a social mission. “I don’t see myself like this until I reach my goal. If I see it in real life, then I can talk about myself in this way.”

Ziad is positive about the future of Hella Sketch. She thinks that her following base will keep on growing. If she continues to work with the same passion, she believes that she might be able to live from her sketches one day. Most importantly, she hopes that her sketches will have a big impact on Iraq. Although Iraq still has to endure many problems, she is also positive about the future of Iraq. “I still have hope, I still have positive ideas about society, about the country. And I hope someday when everything goes right, they will say: she really contributed.”