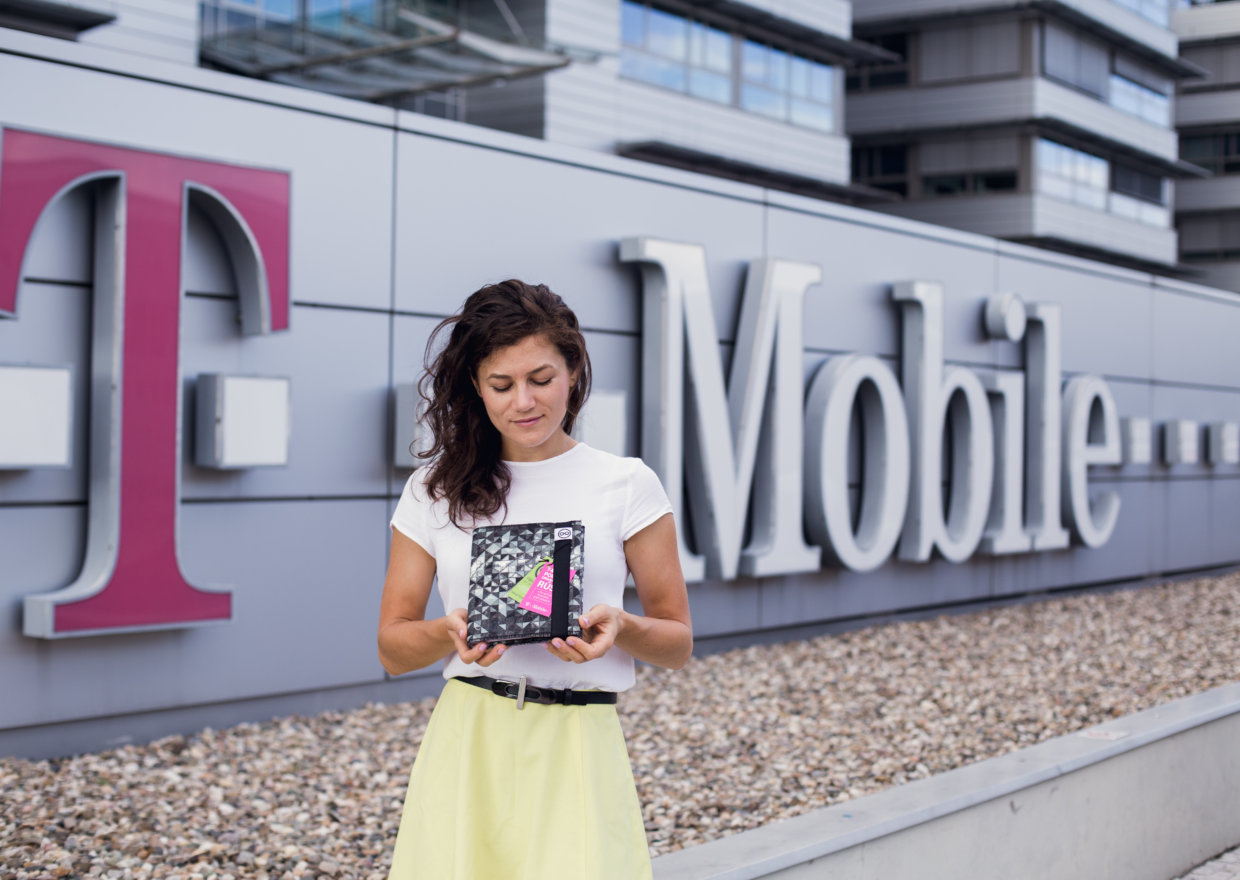 Entrepreneurship in the Czech Republic isn’t a forgone conclusion. When walking around the beautiful city centre of Prague, its famous capital city, the amount of economic activity can’t be missed. The city is in constant development, and so are its inhabitants. One of them, Markéta Borecká, is part of a rapidly growing business niche that has reached the former Iron Curtain. Social entrepreneurship in the Czech capital is hot. A few years ago, as one of the first, Markéta started her own social start-up: FOREWEAR. A social enterprise that creates functional design products from worn clothes, coming straight out of sheltered workshops.

Markéta Borecká, a smart thirty-something born and raised in Prague, hasn’t only seen the entrepreneurial spirits of her city change. When growing up, her country like we know it now didn’t even exist. She was born in the communistic era, in a country formerly known as Czechoslovakia, which now only is a vague memory in her mind. Because she has spent most of her life in the post-Velvet revolution time, living in the Czech Republic that we know now, she was able to study in both Prague and Switzerland. In 2013, after graduating and working in consulting for a few years, she founded FOREWEAR.

This is a social enterprise that uses worn clothes and gives them a new purpose: through creation of contemporary and functional design products. The used sweaters, jeans and jackets are collected through clothes swapping events and clothes collections in and around Prague. The clothes are mainly coming from people who work for the companies that FOREWEAR produces the products for.

A part of the collected items goes to people who can’t afford to buy new clothes, the other part is used to make recycled textile materials for the production of the design products. All carefully knitted together by socially disadvantaged seamstresses. From special smartphone cases to diligent diaries.

Markéta comfortably leans back on her small chair, she is sitting in the back of a trendy coffee shop in an equally trendy part of the capital. A very special place, so she tells us. Kavárna Mezi Řádky – meaning something like ‘between the lines’ – is a café that hires people who have a distance to the labour market, serving tasty cappuccinos and espressos. 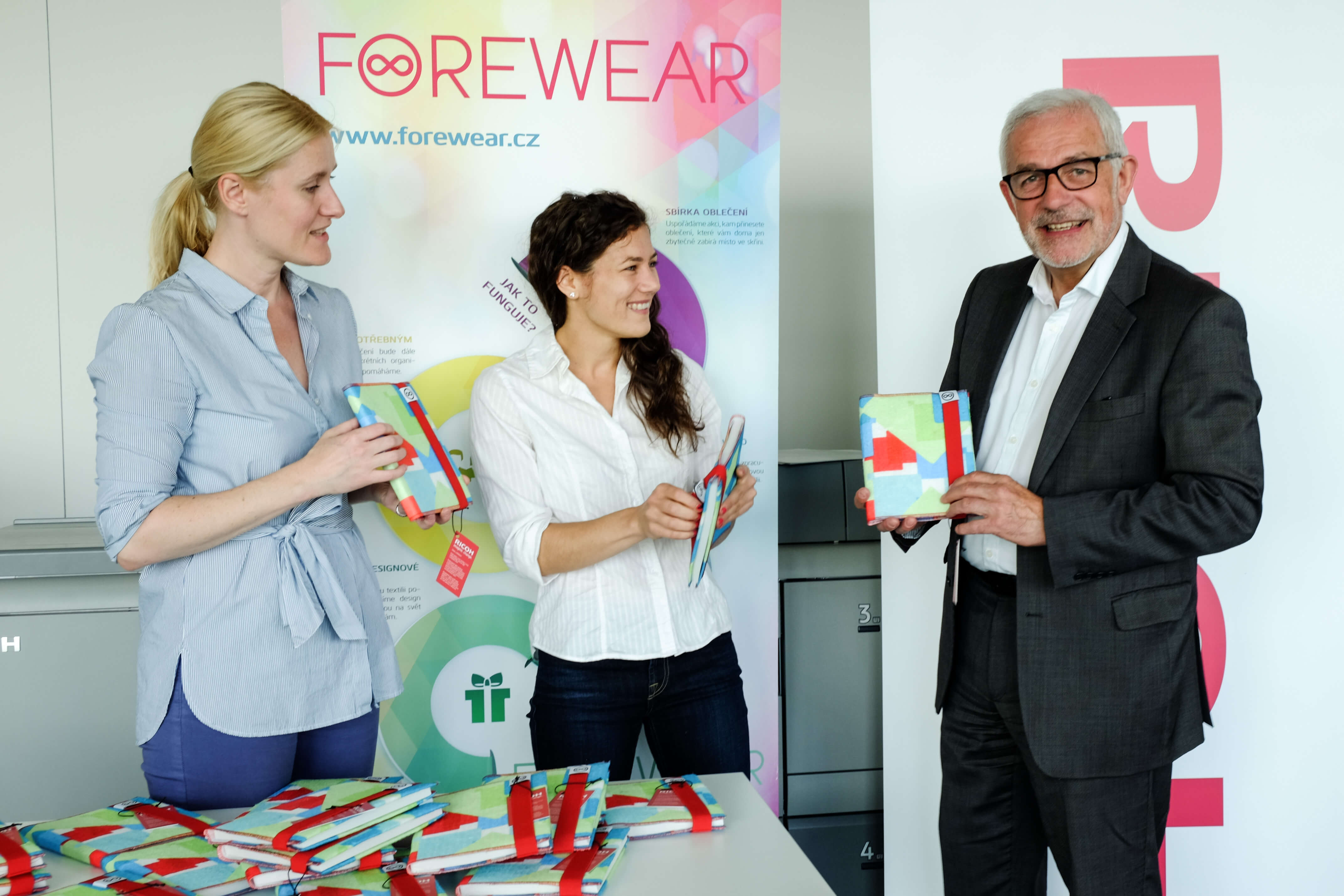 It is a hot summer day in the wonderful city, that was once home to the famous writer Franz Kafka. It’s not hard getting lost in the history of the old town. By all its history, as a visitor, you tend to forget that Prague is currently booming on the field of business as well. New social enterprises are being founded frequently and Kavárna Mezi Řádky and FOREWEAR are just a few examples.

From clothes swapping to design products

Her FOREWEAR adventure started when Markéta was studying and got involved in clothes swapping events in Prague. The concept of having her own social enterprise can be traced back from that period: “It all developed quite natural, at that point I was already busy with used clothes. We had a small idea to produce something that could follow from the clothes swapping events, just so we could continue having them.”

At that point the team of volunteers came up with a miraculous plan: the production of 20 original knitted bags made from clothes swapping events left-overs, created by people who work at a sheltered workshop. The first baby steps of an idea FOREWEAR is based upon.

In 2013, Markéta and her team received the Social Impact Award, a huge boost to her own confidence, and that was the time when she came up with the concept of FOREWEAR. In the early days, she had a full-time job next to her start-up, meaning that she had to spend almost all of her free time on this ambitious project.

A while later Markéta, based on her intentional clothes swapping activities, developed a true business model. She was going to organise clothes collections at companies and the design products that were produced from these clothes would be used as functional presents for the people that work at that company and for company clients and partners. 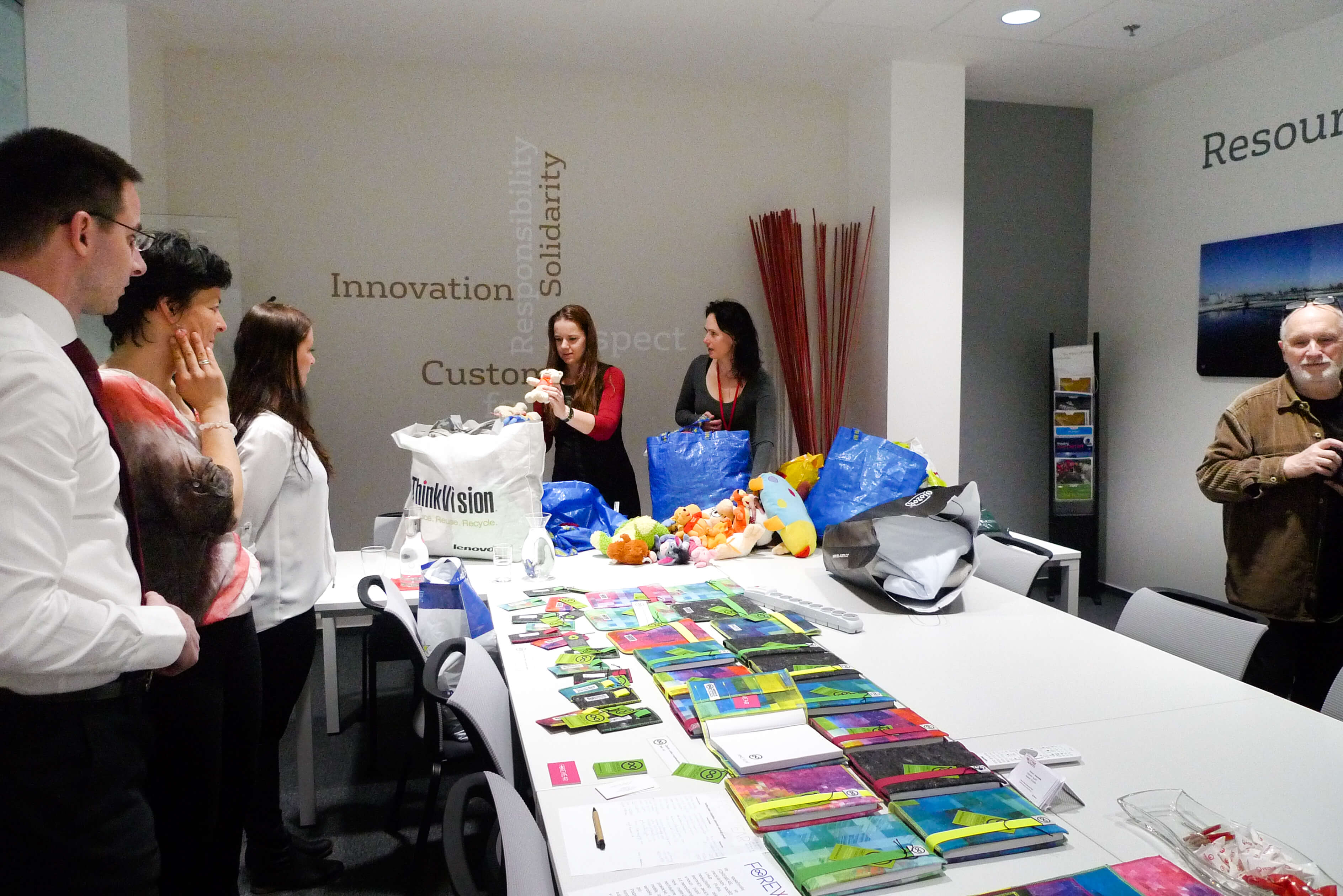 As an employer or employee you can find your once redundant sweater turned into a wonderful new smartphone cover or tablet case. A tremendous concept, that started to gain a good reputation soon after its launching. Not only are the products aesthetically in shape, they also contribute to a better and greener world. “I hate wasting and recycling is something close to my heart,” says Markéta. “The social and sustainable components of my company are really important to me.”

“The social and sustainable components of my company are really important to me.”

After a few years of establishing the concept, when new companies kept on reaching out to have their designed and recycled limited edition of products made, there was another succes for FOREWEAR, Markéta won the title ‘Sole Trader of the City of Prague’ in 2015. She also arrived at a difficult crossroad: going for certainty and continuing with her steady job or quitting her ‘9 to 5’ and pursuing her dream.

After some careful consideration, she chose for the last option: something that, in retrospect, turned out to be a good choice. Because at this point, more than one year after this life-changing decision, she is still the owner of FOREWEAR: a well-respected social enterprise as of now where the orders seem to keep on coming. “I consider that to be my greatest success,” she explains. 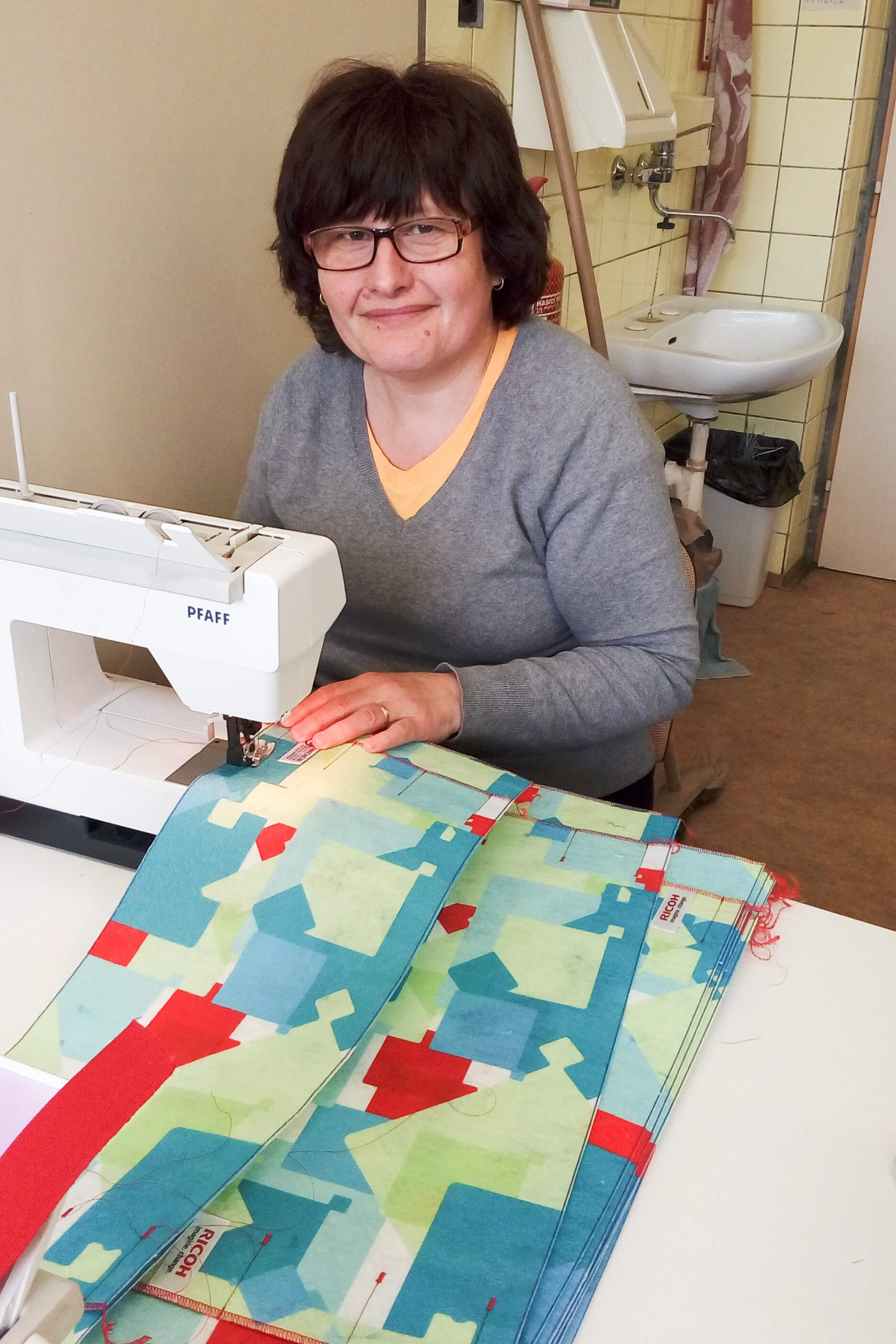 FOREWEAR has produced products for over 25 big companies, mainly in the Czech Republic. T-Mobile, Nielsen, Tchibo, Sodexo, GE Aviation: just a small selection of corporates that Markéta produced her design products for. The companies use the products for things like Christmas presents or merchandise. “Thanks to these companies we are able to keep four seamstresses working the whole year.”

Social entrepreneurship after the Velvet revolution

The Czech Republic has been an independent nation for a bit more than 25 years. In its diverse – recent – history the Eastern European country, and its capital Prague, have been part of the former Socialistic block. Although the impact of this history is still somewhat tangible, the country has been making huge steps forward the last couple of decades. Entrepreneurship, before the Velvet revolution in 1989, used to be seen as something rather shady and associated with criminal activity. But in the new millennial that reputation changed, resulting in a great business climate in the bigger Czech cities. 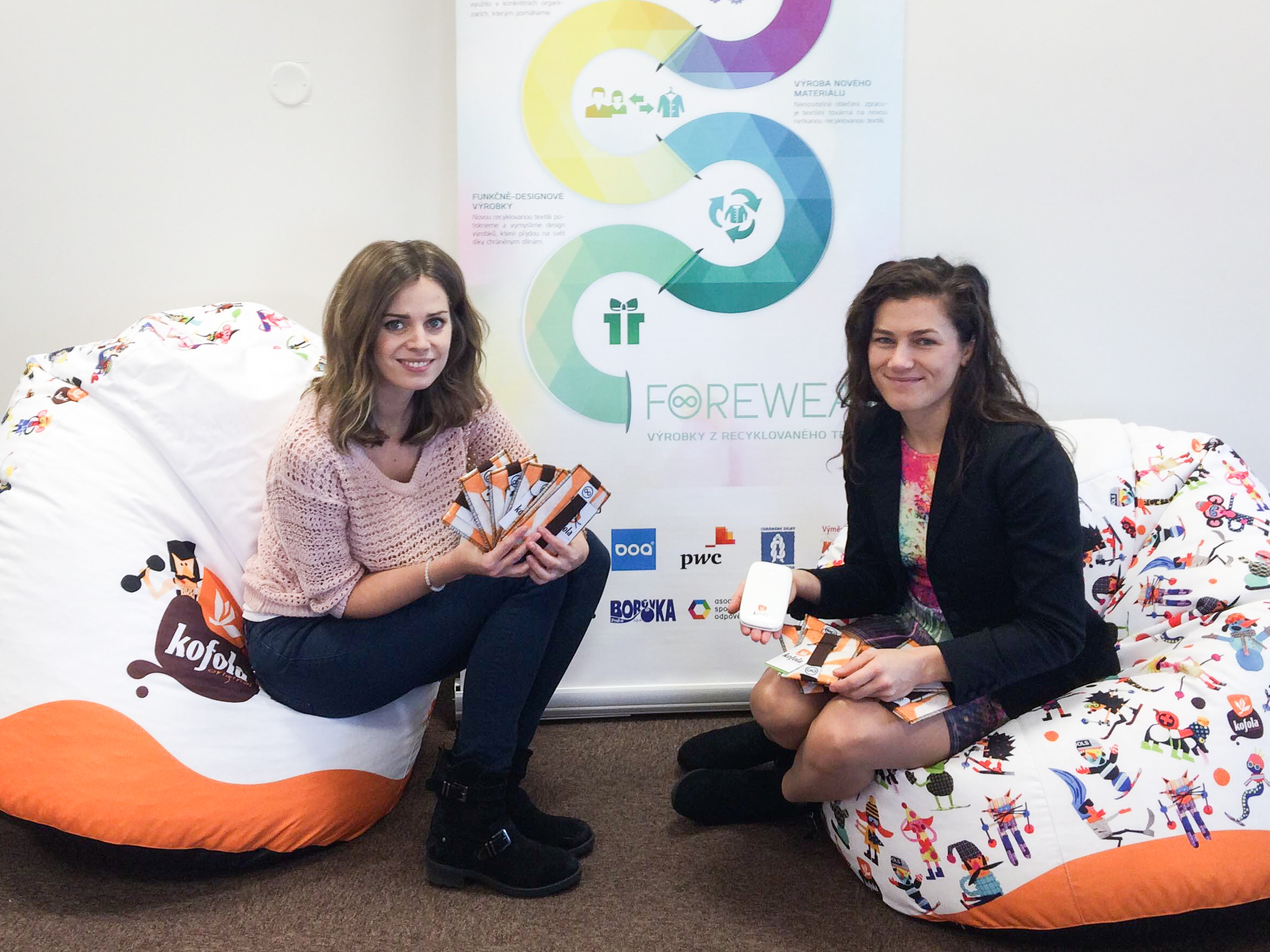 In the last five years, social entrepreneurship has been part of this success story too. It’s safe to say that the improved reputation played a key role in the breakthrough of this ‘new way of doing business.’ “When we won the Social Impact Award, that was a huge motivation to create a sustainable social business model. This took some time, but with the help of the Impact Hub Prague I was able to start my own social entrepreneurship.” With its own Impact Hub, numerous of social enterprises and startups, Prague became a city with social business expertise. Nowadays, social business models like FOREWEAR have a real chance of succeeding, something that was very unlikely 30 years ago.

However, keeping a social enterprise in business and being able to live from the profits, is far from a certainty right now. “Building your own brand can be extremely difficult and demanding. Patience, courage, expertise and dedication are essential here,” Markéta explains. She herself, spent hours and hours of her past time building her own business, something that didn’t come without cost. “The people around you won’t always understand, sometimes it takes years to be at the place where you want to be.”

As of now, thirty-something Markéta Borecká seems to have reached that sought-after place, directing her to other phases of life. She mentions the long and winding road to a “peaceful mind”. New stages of life begin, where others are slowly vanishing. 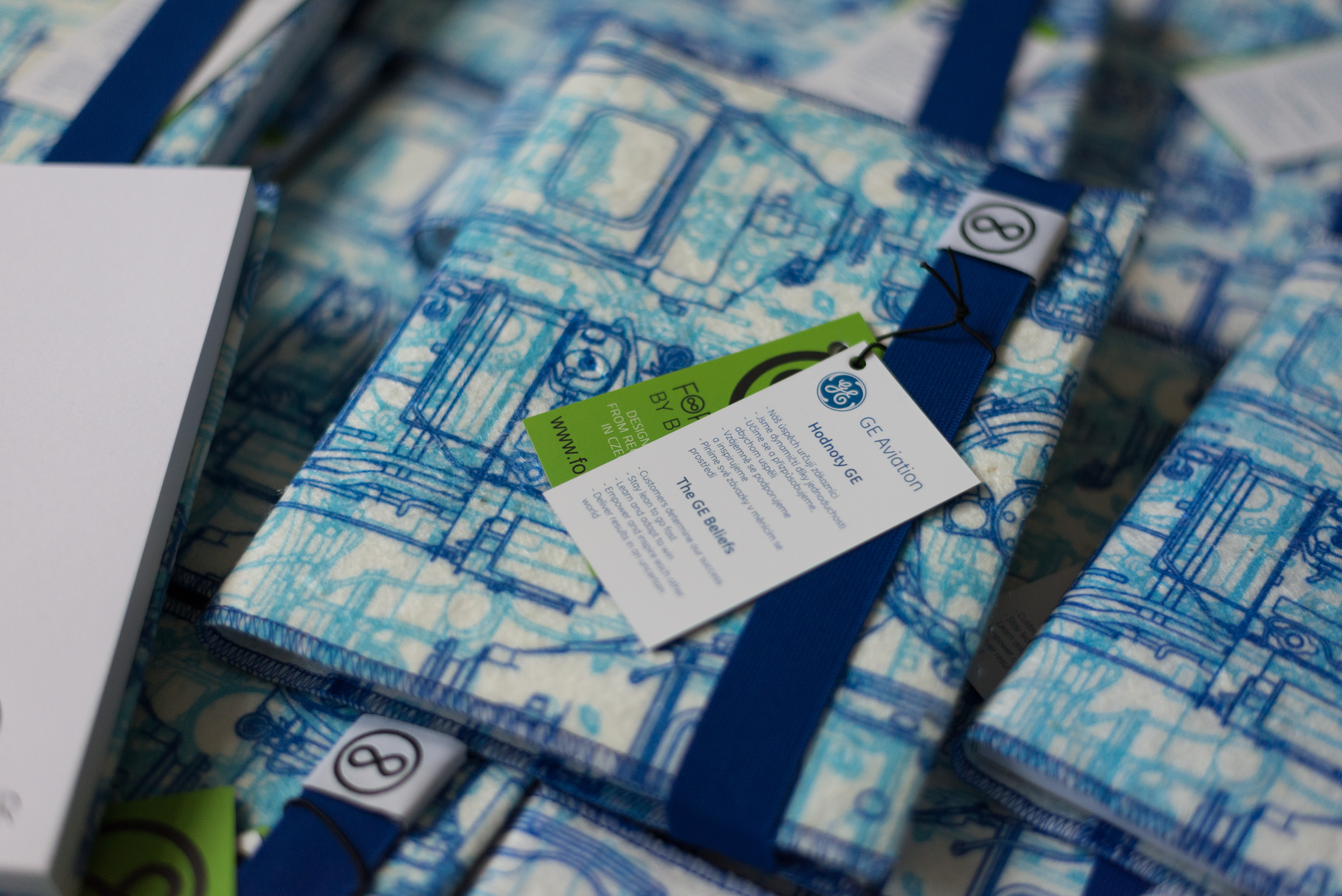 That doesn’t change the fact that she is still working on FOREWEAR on a daily basis. “Unexpected problems with the prints, material or quality: social entrepreneurship – to me – always means solving problems and making decisions.” A certain calmness shines through the young entrepreneur when she speaks. She isn’t too thrifty with her sentences, but she choses them rather wisely. She is ambitious, but doesn’t exactly shout it from the rooftops. What the future may hold for her: it’s sure that Markéta will keep on making social impact with her FOREWEAR products.

At this point, mainly within the borders of the Czech Republic, but who knows what future international opportunities will occur. “I try not to look too far into the future and be too expansive, you never know the exact consequences your decisions will have,” says Markéta Borecká as she walks into the crowded sun filled-streets of her city.

“Social entrepreneurship to me means solving problems and making decisions.”

Want to know more about the products of FOREWEAR? Check out there: http://www.forewear.cz/en.